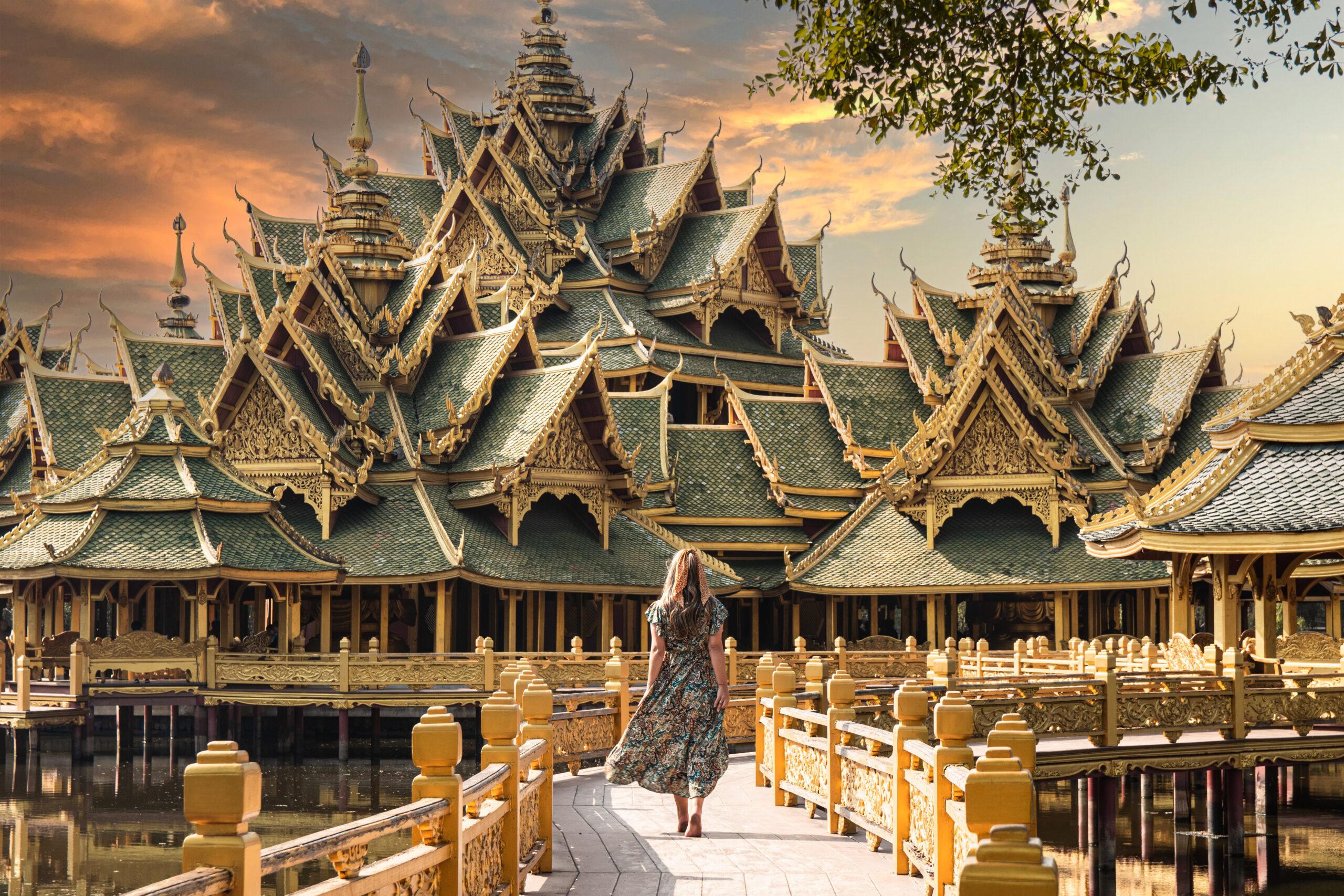 We recently came back from Thailand and we have so many great moments and experiences which I can’t wait to share with you! During that trip we spent four days in Bangkok, Thailand’s capital and visited some of the most spectacular Bangkok Temples.

Did you know that Bangkok has more that 400 temples? And in Thailand temples are called “Wat”. In this post I’ll talk about our 3 favourite temples plus one that is not an actual temple (I’ll explain). The first one is Wat Arun which is probably the most famous temple in Bangkok, the second one is Wat Pho which is a 2 minute ferry ride from Wat Arun and then there’s Wat Benchamabophit which is my personal favourite!

Wat Arun means “Temple of the dawn” and it is a Buddhist temple that got its name from the Hindu god Aruna. It’s considered to be one of  Thailand’s landmarks and it’s located on the West bank of Chao Phraya river. The main feature of Wat Arun is its central tower – like spires which are encrusted with colourful porcelain. This is interpreted as a pagoda encrusted with coloured faience.

Wat Pho is also known as the Temple of the Reclining Buddha because it houses a 46 meter reclining Buddha! King Rama I rebuilt the temple complex on an earlier temple site and it became his main temple. Wat Pho is also the place where some of his ashes are enshrined. To visit this temple we took a super short ferry ride that cost 4 baht pp which is approximately €0,11.

Wat Benchamabophit also known as the Marble Temple, is located in the Dusit district of Bangkok. From all the temples we visited in this vibrant city, this one was our favourite by far. King Chulalongkorn was the one who requested the construction of this temple in 1899 after building his palace near by while the king’s half brother Prince Naris designed it. Wat Benchamabophit literally means “the Temple of the fifth King located near Dusit Palace” and I personally am super proud of me for remembering how to say and spell Wat Benchamabophit! :)

The temple in the main photo of this post is from the Ancient City and it’s not really a temple. Actually the whole Ancient City, also known as Mueang Boran is the largest outdoor museum / park and it features 116 replicas of Thailand’s famous monuments. This park is a bit outside Bangkok but we had the most amazing time there so we would definitely recommend a visit. Oh and a small tip, get your tickets online before you visit. It was much cheaper!